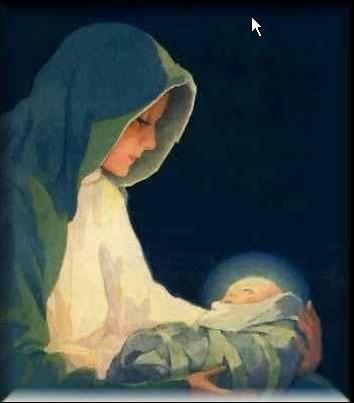 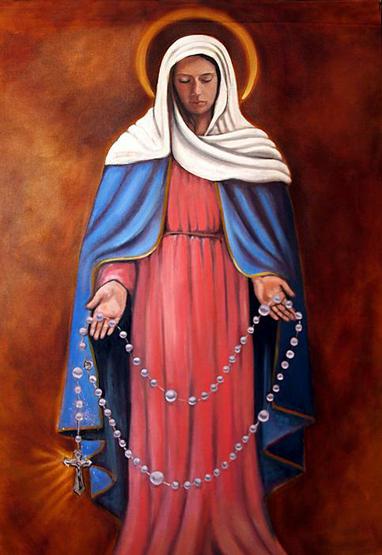 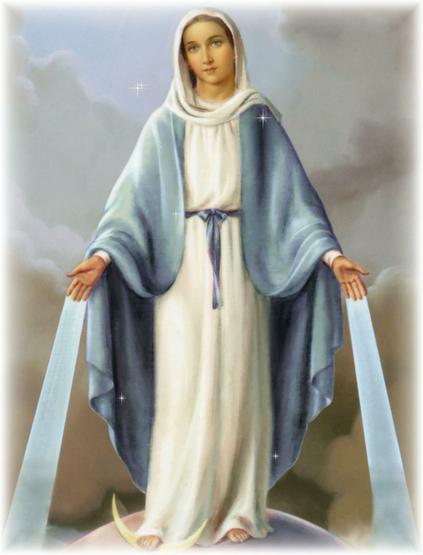 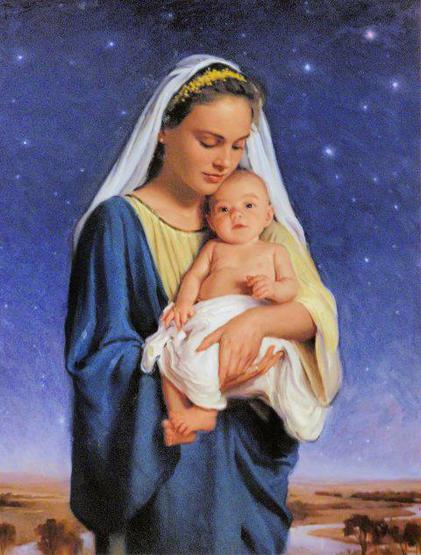 Mary's mom was named Anne and her dad was named Joachim.

When Mary was a young girl, she met a man named Joseph who lived in Nazareth, her same town.  He was a nice man.  They decided they would get married.  The whole

town was so happy for them and could hardly wait for the wedding day.

A very strange thing happened to Mary soon after she had decided to marry Joseph.  She was at home when an angel appeared to her.  He said his name was Gabriel and he told her that she had been chosen by God to be the mother of the Savior.  He asked her if she wanted to do that and Mary agreed.  While the angel was there, he also told Mary that her cousin was going to have a baby.

Mary left very soon to visit her cousin, Elizabeth.  Mary stayed with her for 3 months until Elizabeth's baby was born and then Mary retuned home.

Joseph was also visited by an angel telling him that Mary was having God's child and to name him Jesus.

Joseph and Mary were married.  Joseph was a carpenter and he worked very hard in the carpenter's shop for Mary and their new son that was about ready to be born.
In those days, the emperor wanted to count all the people that he ruled.  Joseph and Mary had to go to Bethlehem.  It took them nearly a week to travel there.  When they got there, the town was so full of people, there was no room for them to stay.  They found a cave.  The people kept their animals inside that cave.  Since they kept
the animals in the cave, they called it a stable.  They decided that staying in the stable was better than out on the street.  They made the stable as comfortable as they could for Mary. She needed to rest.

That night, their baby was born. Joseph and Mary loved their new son and they did as the angel had asked of them. They named him Jesus.

Jesus grew up and Mary taught him to walk and talk.  She loved him very much. One time when Jesus was 12, he got lost.  Mary and Joseph were frantic searching for him.  After 3 days, they found him talking to the teachers in the temple

Jesus lived in Nazareth with his parents.  Joseph taught him to work in the carpenter shop and Mary cooked and cleaned for Jesus and Joseph.  Jesus grew into a man and he and Mary were close.  They were always talking and enjoying each other.  One time they went to a wedding and the wine was all gone. There was nothing to drink.  Mary asked Jesus to help, and he performed his first miracle.  He turned the water into wine.  He did it just because his mother asked for his help.

Can you imagine her sorrow over the death of her son on the cross?  Her heart was breaking.  While Jesus was on the cross, he said, "This is your mother."  Mary is our mother.

After Jesus went to heaven, Mary stayed with his apostles and prayed with them waiting for the Holy Spirit to come.  She was always helping them.  Jesus took her to heaven to be with him and he crowned her queen of heaven and earth.  He wanted to be with his mom again.  He loves her so much but he didn't forget his promise to us.  He gave her to us to be our mother too and she still is and always will be.  Wasn't that nice of Jesus to share?  Jesus is like that, yes he is!

Remember, Mary is wonderful! She is our mother.  She is to be loved, respected and talked to daily.  She is not God. She isn't to be worshipped.

Thanks to Mary, we have many graces given by her.  All we have to do is ask her for her help.  Jesus gave her the ability to help us if we ask her.  Remember the wedding?  He performed his first miracle just because his mother asked him to help those people.  It's still like that.  We ask Mary for something and she asks Jesus and he can't deny his mother whatever she asks.

There has been many times when Mary came here and talked to us. She had a special message for us.

There were 4 special times that Mary delivered God's message to us.