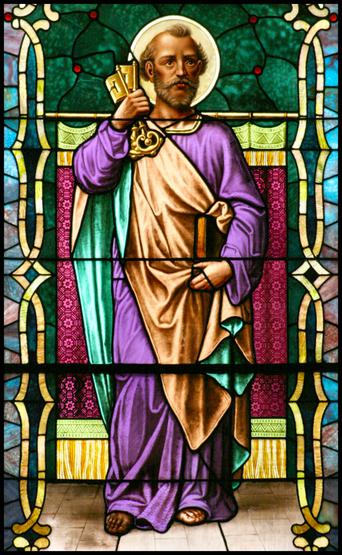 Who was St Peter?

Peter, the first pope, was a fisherman from Galilee. Jesus invited Peter to follow him, saying: "I will make you a fisher of men." Peter was a simple, hard-working man. He was generous, honest and loved Jesus very much.

This great apostle's name was Simon, but Jesus changed it to Peter, which means "rock." "You are Peter," Jesus said, "and on this rock I will build my Church." Peter was the chief or prince of the apostles.

When the Roman soldiers arrested Jesus, Peter was afraid. In his fright he committed the sin of denying that he knew Jesus, three times. Peter was terrified that they would kill him too, but before Jesus died, Peter repented totally. He wept over his denials for the rest of his life and Jesus lovingly forgave Peter.

After the resurrection Jesus asked Peter three times: "Do you love me?" "Lord," Peter answered, "you know all things. You know that I love you." Jesus truly did know! Peter was so right. Jesus said kindly: "Feed my lambs. Feed my sheep." He was telling Peter to take care of his Church because he would be ascending into heaven. Jesus left Peter as the leader and head of His Church.

Peter later went to Rome to live. Rome was the center of the whole Roman Empire. Peter converted many nonbelievers there. When the fierce torture of Christians began, they begged Peter to leave Rome and save himself. Peter started out and on the road and Jesus appeared to him. Peter asked him, "Lord, where are you going?" Jesus answered, "I am coming to be crucified a second time."

Then St. Peter turned around and went back. He understood that this vision meant that he was meant to suffer and die for Jesus. Soon, he was taken prisoner and condemned to death. Because he was not a Roman citizen, he, like Jesus, could be crucified. This time he did not deny the Lord. This time he was ready to die for Jesus. Peter asked to be crucified with his head downward since he was not worthy to suffer as Jesus had. The Roman soldiers did not find this unusual because slaves were crucified upside down.

St. Peter was martyred on Vatican Hill. It was around the year 67. Emperor Constantine built a large church over that sacred location in the fourth century.